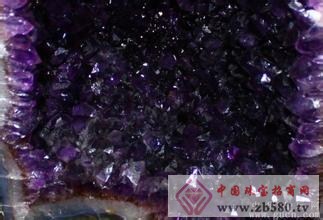 2. There is a white slender trace in the crystal cavity. If it is said that it has been filled with crystal glue.

3. Is the appearance of the Amethyst Cave intact? Incomplete and damaged is not a good crystal hole.

4. There is no agate edge on the outer edge of the crystal cavity. The number of agates is higher, and if there is agate and the agate is complete, the figure is higher.

5. The thickness of the agate side. In principle, the thicker the agate side, the better. A good amethyst hole is bound to have a layer of one-finger agate layer, because agate and crystal are symbiotic, but some amethyst holes are very beautiful, but no agate layer is not a complete crystal hole.

6, the depth and uniformity of the color. Generally, the more purple the color, the better.